Preserving the Sounds of the Past

In the mid-1980s, Barry Darling delivered a collection of recordings and materials from WLBZ Radio to Special Collections at Raymond H. Fogler Library. He wasn’t sure what would become of the recordings, but he had a feeling he was bringing them to the right place.

“I worried they would just get thrown out if I didn’t take care of them,” says Barry, who was the general manager at WLBZ Radio from 1978-1983. “And I just a sense that they belonged at UMaine.”

At the time, he didn’t know that nearly thirty years later he would once again be the person giving new life to the collection. In 2012, he began volunteering his time in Special Collections, where he has helped convert a vast portion of the recordings to digital formats so they can be put online in the University of Maine Digital Commons.

The WLBZ collection includes station records, audio recordings, photographs and technical manuals that reflect the growth of the radio station from the 1930s through the 1970s. The audio recordings provide a fascinating window into the history of Maine. The recorded broadcasts include local programming, local news, commercials, and event coverage, as well as detailed station logs that catalog day-to-day programming at WLBZ.

From the early 1940s through 1983, four separate general managers contributed materials to the collection. According to Barry, much of the credit for the collection goes to Edward Guernsey, who served as general manager from 1934-1974 and meticulously saved as many records and documents as possible from WLBZ.

In many ways, Barry is the ideal person to help preserve the materials. He began working at WLBZ in 1967 as a salesperson, but his connection to the station began long before. From the 1930s to 1970s, his father, Louis Darling, worked at WLBZ as an engineer.

His father gave him an appreciation for the technical side of radio broadcasting and also passed on the history of WLBZ from an engineering perspective, at a time when the industry was rapidly growing and evolving.

Barry’s combination of personal experience and technical knowledge add unique context to the collection. His knowledge of the materials and equipment has also been valuable. Many of the broadcasts, recorded on 16-inch records and reel-to-reel tape, require special equipment to play. In some cases, he has contributed his own equipment to play and digitize the recordings.

Barry also recognizes that his personal and family history with WLBZ makes the project especially gratifying for him. 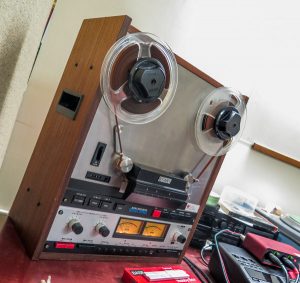 “I’m the only person left with both direct and indirect knowledge, through my father, of the history of WLBZ,” he says. “This is a labor of love for me. I want to record, as accurately as I can, the engineering and technical history of WLBZ from its beginnings as an amateur radio station in 1921 on into the 60s and 70s.”

About the Collection: The WLBZ station records and audio recordings at the University of Maine’s Raymond H. Fogler Library Special Collections Department reflect rapid growth and evolution of the station from the 1930s to the 1970s. Materials include station logs, items related to licensing and operations, and many audio recordings of locally recorded programming. The digital collection makes several of these audio recordings available along with accompanying transcribed text.