The Spirit of the League

With the passage of the Nineteenth Amendment in 1920, the particularly civic-minded and altruistic women who had fought for universal suffrage were free to take up further initiatives with a renewed faith in democracy. Many of them spoke of their single-minded pursuit of the vote as a kind of temporary renunciation—as necessitating a neglect of other areas of public welfare.

Political equality was necessary, but it was not enough. The women who fought for universal franchise believed that society must be educated in civics and regulated in the interest of social justice.

Once the Amendment was ratified, this powerful organization of progressives had to decide how to sustain the tremendous momentum it had accumulated during the fight for suffrage and how to direct that momentum toward programs for the common good. Carrie Chapman Catt, who succeeded Susan B. Anthony as president of the National American Woman Suffrage Association (NAWSA), suggested a reincarnation of the movement on a grand scale: a League of Women Voters, which, like NAWSA, would be a federation of state institutions.

The League’s founders believed that initiatives such as child labor laws and programs for the welfare of struggling mothers would, by their evident necessity, draw in women who had never campaigned for suffrage.

Among the volunteer associations that formed out of the women’s movement in the 1920s, the League of Women Voters was unique. As Maud Wood Park, the League’s first president, explained, “No other organization is devoting its energy exclusively to education in citizenship and the interests of women as voting citizens.” In 1921, Park drew a thousand league members to the national convention in Cleveland, Ohio, praising them for their resolution and summoning the League to fulfill its unique role of initiating social change through elections and voting.

There are now eight hundred Leagues—official Leagues of all fifty states, the District of Columbia, Hong Kong, Puerto Rico, the Virgin Islands and many local Leagues, which concern themselves with elections for city and county government and community welfare. Almost a century after it was established, the LWV of Maine still meets to facilitate “informed and active participation in government” statewide, and local Leagues meet in Brunswick, Portland, Bangor, Down East, Machias and Midcoast to encourage a more focused attention to the welfare of these areas.

As part of its mission to inform the electorate, the League kept – and still keeps – records both of their own meetings and activities, and also of public meetings, lawsuits and other initiatives, including their own “Easy-to-Read Voter Guides,” nonpartisan guides to the questions on national, state and many district ballots. The LWV of Maine records – a wealth of primary sources – are now available to researchers at UMaine’s Fogler Library. 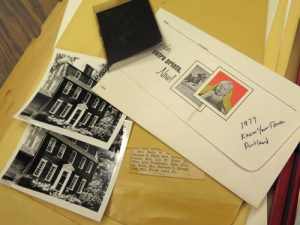 The ninety-eight boxes of League materials, which have been donated to Fogler in lots over the past thirty years, and which will be joined by future donations, are neatly subdivided into folders containing albums, campaign buttons and fliers interleaved with detailed accounts of political initiatives dating back to 1913. Past League initiatives include advocacy in support of labor laws, child welfare, campaign finance reform, freedom of information and the establishment of public forums to promote discourse between political parties.

The League’s century of commitment to a broad range of civic projects has drawn together a collection of documents and correspondence that will be an invaluable source for a variety of research interests. For example, the collection was recently used by researchers who were interested in the history of term limits in the Maine State Legislature. In 1993, the term limits were approved by referendum in Maine, and in 1997, the League of Women Voters of Maine – which still challenges these limits – filed suit, opposing the new legislation as a regulation that “can take away the right of voters to vote for candidates of their choice.”

“The collection is very good for [research subjects] like the term limits vote,” explains Special Collections archivist Beth Russell, “because you see the process of how a law comes to be and evolve. The League of Women Voters is non-partisan, so you get a broad overview of what’s going on, not just nationally but locally in the state and the Bangor area as well.”

Until about three years ago, this rich collection was only partly organized, and researchers had no easy way to identify which of the almost one hundred boxes would contain dates and subjects of interest to them.

Now researchers can download from Fogler’s website a list of cataloged items, known as a “finding aid,” which provides the subjects and dates of material contained in this diverse collection of primary sources. The finding aid was developed by two UMaine student-employees who worked under the supervision of Russell.

The finding aid gives researchers a way to orient themselves within the large collection. Fogler’s commitment, Russell explains, is to make the League documents fully accessible to the public.

“You don’t have to have a library card to request these records from the Special Collections reading room,” says Russell. “We want scholars of all ages to use them. Our mission is to collect, preserve, and make these records accessible to both the university community and the public at large.”

The League collection, which spans from 1913-2008, is one of Fogler’s largest—it fills nine bays of the Annex’s twelve-foot-high shelves. The scope of the collection is evidence of the breadth of this volunteer organization’s civic presence, but occasionally the task of cataloging the large and sporadically growing collection seemed overwhelming to Moriah Frances Lee, one of the two student employees who worked on the collection’s finding aid.

“I remember I was almost done,” says Lee, “and then [the LWV of Maine] dropped off another thirty boxes and I thought, ‘I’m never finishing this!’”

Nevertheless, Lee worked methodically on the collection, reading and sorting through hundreds of folders of documents and correspondence, until she graduated with a degree in kinesiology in May 2016. Despite having no prior familiarity with the collection, Lee was impressed by the League’s programs for public welfare.

“They actually did a lot, and they are very involved with the community,” she says. “It was fascinating to see that this is an organization that actually made an impact.”

After Lee graduated, Brooke Wilson, a UMaine student majoring in molecular and cellular biology, took over the cataloging duties. Three days a week, Wilson works through papers in the high-ceilinged Annex, Fogler Library’s off-site storage building. As she cataloged the collection, Wilson was struck by the variety of the organization’s initiatives.

“There’s a lot on nuclear plants and nuclear waste,” she says. “I wouldn’t have expected them to be interested in that.”

Over the past decade, the LWV of Maine has promoted regulations and new voting methods that will, they hope, allow the electorate’s choices to be better represented by their vote. Barbara McDade, former president of the LWV of Maine and Director of Bangor Public Library, organizes monthly meetings of members in Bangor.

“Rank-choice voting and money in politics are the two statewide issues that we’re focusing on now,” says McDade. “But at the same time, we’re educating the voters on what’s going to be on the ballot.”

She estimates that there are about two hundred members statewide. “It’s amazing to me how much they do. It is just phenomenal.”

The LWV of Maine is a volunteer-only organization and relies on the effort of its members.

“There is an opportunity, especially right now,” says Ann Luther, treasurer of the LWV of Maine, “to build new chapters and to make the League a really vibrant part of civic life.

“Since the election of 2016, there has been a pretty dramatic resurgence of interest in civic work.”

When asked if, in her experience, League members had time to study the collection of historical papers at Fogler, or to discuss the organization’s previous accomplishments, Luther said that she felt there was “lots of room for more of that.”

The history of the League of Women Voters of Maine has yet to be written, but perhaps with this resurgence of civic interest among its members, and now that its papers are readily available at Fogler Library, historians can devote more attention to the organization’s century of dedication.

In the future, it may be possible to further refine the catalog of League papers, but the work that UMaine students have done gives researchers a way into this complex and largely unexplored collection. After just five or so more boxes are inventoried, their contents sorted and transferred to acid-free folders, the corroded metal paper clips weeded out and replaced with plastic ones, this finding aid will account for the entire collection—at least until the next donation.

This story was originally featured in the 2017 Raymond H. Fogler Library Magazine.